This Blog App demonstrates some of the capabilities in ServiceStack Web Apps - an exciting real-time development model for developing .NET Core Apps where entire Web Apps can be developed within a live hot-reload experience without any compilation, build tools, dependencies, IDEs or any C# source code necessary by using the powerful and user-friendly ServiceStack #Script language and its comprehensive built-in functionality.

This eliminates much of the complexity inherent in developing .NET Web Applications which by their nature results in highly customizable Web Apps where their entire functionality can be modified in real-time whilst the App is running, which is simple enough to be enhanced by non-developers like Designers and Content Creators courtesy of its approachable Handlebars-like and familiar JavaScript syntax.

Compiled Apps can have a prohibitively large barrier to entry where any modification often requires downloading source code separately, setting up a matching development environment with appropriate extensions and correct versions and non cursory level of experience with their chosen language, frameworks, build tools and other platform idiosyncrasies.

By contrast Web Apps require no development environment, no IDE's or build tools with all source code already included as part of the App which can be modified in real-time by any text editor to instantly view changes as they're made. So Apps like http://redis.web-app.io which provide a rich Admin UI for searching, browsing and modifying Redis's core data structures, can be easily enhanced by modifying a single index.html at the same time as using the App.

This /Blog Web App is another example of encapsulating useful functionality in a highly customizable .NET Core Web App which to maximize approachability has no C# source code, plugins and uses no JavaScript or CSS frameworks. The development of which ended up being one of the most enjoyable experiences we've had in recent memory where all the usual complexities of developing a C# Server and modern JS App has been dispensed and you can just focus on the App you want to create, using a plain-text editor on the left, a live updating browser on the right and nothing else to interrupt your flow.

Any infrastructure dependencies have also been avoided by using SQLite by default which is automatically created an populated on first run if no database exists, or if preferred can be changed to use any other popular RDBMS using just config.

Whilst most blogging platforms just edit static text, each Post content has access to the powerful and Sandboxed features in https://sharpscript.net/ which can be used to create Live Documents or Render Markdown which is itself just one of the available blocks where it will render to HTML any content between the markdown blocks:

By default the Markdig implementation is used to render Markdown but can also be configured to use an alternate Markdown provider.

To make it easy to recall Markdown features, each Content is equipped with a Rich Text editor containing the most popular formatting controls along with common short-cuts for each feature, discoverable by hovering over each button: 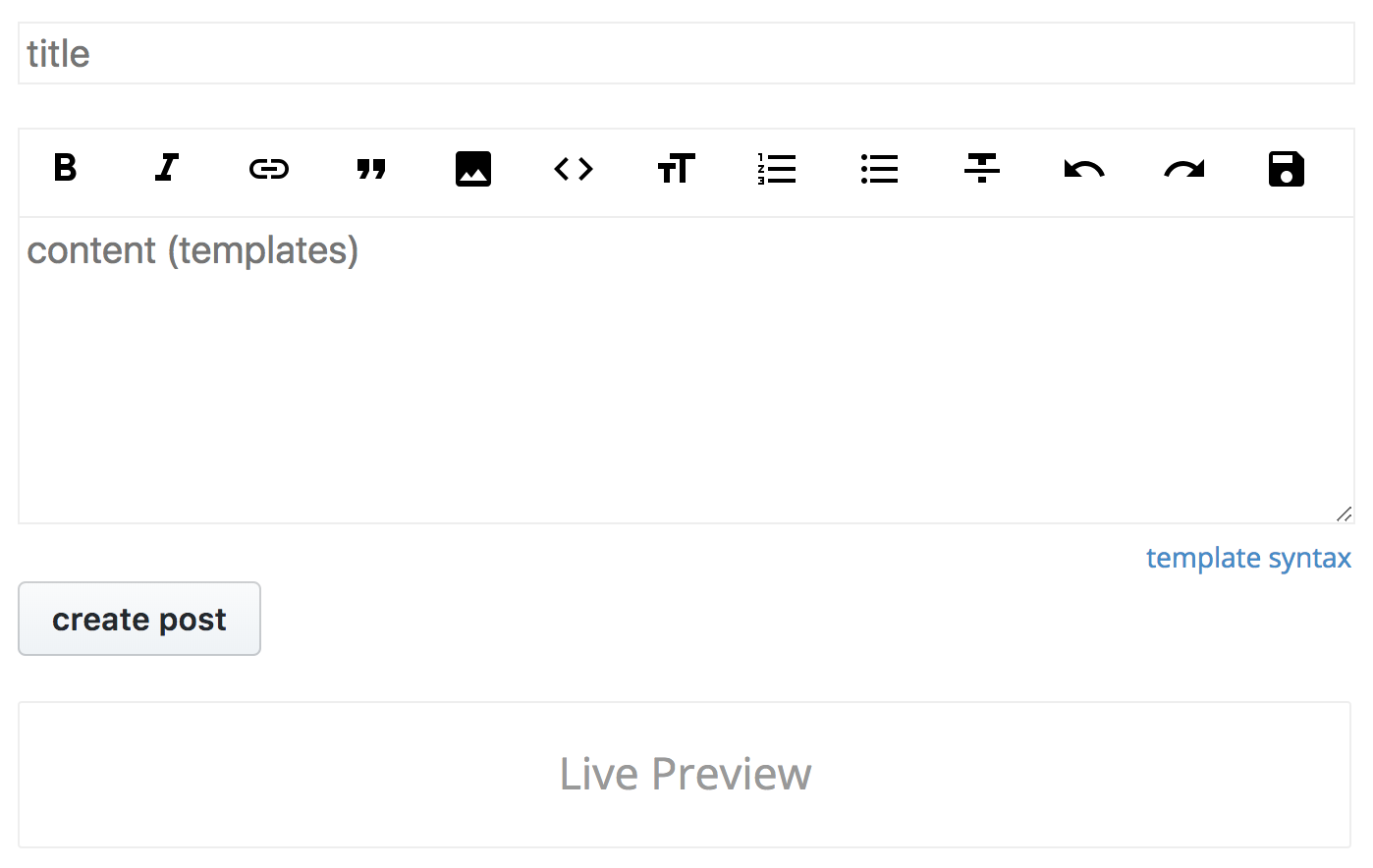 The Editor also adopts popular behavior in IDEs where Tab and SHIFT+Tab can be used to indent blocks of text and lines can be commented with Ctrl+/ or blocks with CTRL+SHIFT+/.

Another nice productivity win is being able to CTRL+CLICK on any Content you created to navigate to its Edit page.

The content in each Text input and textarea is saved to localStorage on each key-press so you can freely reload pages and navigate around the site where all unpublished content will be preserved upon return.

When you want to revert back to the original published content you can clear the text boxes and reload the page which will load content from the database instead of localStorage. 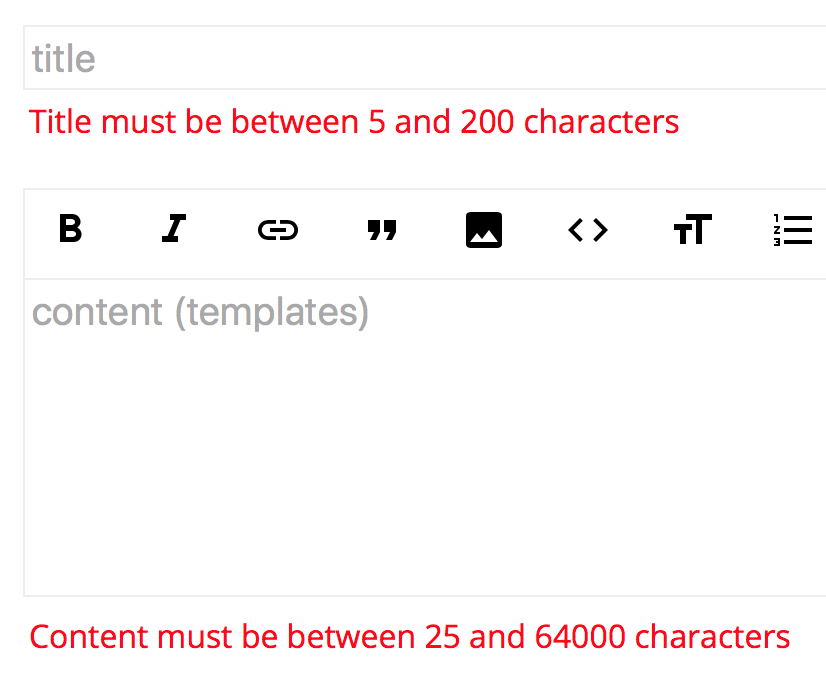 For more info see the docs on Error Handling.

Creating and Posting content benefit from Live Previews where its rendered output can be visualized in real-time before it's published.

Any textarea can easily be enhanced to enable Live Preview by including the data-livepreview attribute with the element where the output should be rendered in, e.g:

The implementation of which is surprisingly simple where the JavaScript snippet in default.js below is used to send their content on each change:

To the /preview.html API Page which just renders and captures any Template Content its sent and returns the output:

By default the evalTemplate filter renders in a newScriptContextwhich can be customized to utilize any additional plugins, filtersandblocksavailable in the configured [SharpPagesFeature](https://sharpscript.net/docs/sharp-pages), or for full access you can use{use:}to evaluate any Template content under the same context thatevalTemplate` is run on.

Template Pages supports conventional page-based routes where the name of each page can be requested with or without its .html extension:

and the default route / maps to the index.html in each directory if it exists, e.g:

Nuxt-like Dynamic Routes can also be used where any file or directory names prefixed with an _ underscore allows for dynamic wildcard paths with the matching path component also assigned to the arguments name:

As the _ underscore prefix for declaring wildcard pages is also what is used to declare "hidden" pages, to disambiguate them from hidden partials and layouts, the recommendation is to have them include layout and partial their name, i.e:

Pages with layout or partial in their name are hidden and ignored in wildcard path resolution.

If you follow the recommended _{name}-partial.html naming convention you will also be able to reference partials using just their name, i.e:

In addition to providing a productive dynamic language for generating HTML pages, Template Pages can also be used to rapidly develop Web APIs which can utilize dynamic page routing to easily create data-driven JSON APIs using optimal pretty URLs, in real-time without any C# classes or compilation in sight!

E.g. To create a Hello World C# ServiceStack Service you would typically create a Request DTO, Response DTO and a Service implementation:

An API which returns the same wire response as above can be implemented in API Pages by creating a page at /hello/_name/index.html with the contents:

Which supports the same content negotiation as a ServiceStack Service where calling it in a browser will generate a human-friendly HTML Page:

Where as calling it with a JSON HTTP client containing Accept: application/json HTTP Header or with a ?format=json query string will return the API response in the JSON Format:

Alternatively you can force a JSON Response by specifying it with:

The /preview.html page uses this to force a plain-text response with:

The preview API above is what provides this Blog's Live Preview feature where it will render any #Script provided in the content Query String or HTTP Post Form Data, e.g:

Which renders the plain text response:

The /_user/api.html API page shows an example of how easy it is to create data-driven APIs where you can literally return the response of an SQL query by calling the dbSelect filter and returning the results with:

The user argument is populated as a result of dynamic route from the _user directory name which will let you view all @ServiceStack posts with:

Which also benefits from ServiceStack's multiple formats where the same API can be returned in:

Which thanks to the live development workflow provides the most productive development experience to rapidly develop Web APIs or perform common tasks like viewing adhoc SQL queries in Excel which can be further manipulated using the LINQ-like expressiveness and wrist-friendly filters available in #Script.

The /posts/_slug/api.html page shows an example of using the httpResult filter to return a custom HTTP Response where if the post with the specified slug does not exist it will return a 404 Post was not found HTTP Response:

Any other arguments like 'X-Powered-By' are returned as HTTP Response Headers.

This behaves similarly to customizing a response with return arguments:

Using the explicit httpResult filter is useful for returning a custom HTTP Response that doesn't have a Response Body, e.g. the New Post page uses httpFilter to redirect back to the Users posts page after they've successfully created a new Post:

For more examples and info on API Pages checkout to the API Pages docs.

Just like Global.asax.cs can be used to run Startup logic in ASP.NET Web Applications and Startup.cs in .NET Core Apps, you can add a _init.html to run logic once on Startup.

This is used in this Blog's _init.html where it will create a new blog.sqlite database if it doesn't exist seeded with the UserInfo and Posts Tables and initial data, e.g:

The output of the _init page is captured in the initout argument which can be inspected as a template argument as done in log.html:

If there was an Exception with any of the SQL Statements it will be displayed in the {{ htmlError }} filter which can be later viewed in the /log page above.

Auth Providers can be configured in the same way Web App Plugins can be registered by first specifying you want to register the AuthFeature plugin with:

Then using AuthFeature.AuthProviders to specify which Auth Providers you want to have registered, e.g:

Each Auth Provider checks the Web Apps web.settings for its Auth Provider specific configuration it needs, e.g. to configure both Twitter and GitHub Auth Providers you would populate it with your OAuth Apps details:

By default Web Apps utilize Markdig implementation to render its Markdown. You can switch it back to the built-in Markdown provider that ServiceStack uses with:

Any web.settings configs that are prefixed with args. are made available to Template Pages. Any arguments which start with { or [ are automatically converted into a JS object:

Where they can be referenced as an object or an array directly:

The alternative is to give each argument value a different name:

Headings can start with 1-6 hashes

So paragraphs separated by multiple lines are rendered as separate paragraphs.

Text pre-fixed with '>' are treated as block quotes

Use a dash, asterisk or plus to create an ordered list:

Whilst you can use numbers for ordered lists:

All Blog posts have access to ServiceStack Templates features which enables they to use a highly-productive, easy to use sandboxed dynamic templating language which lets you easily create live documents like this one: